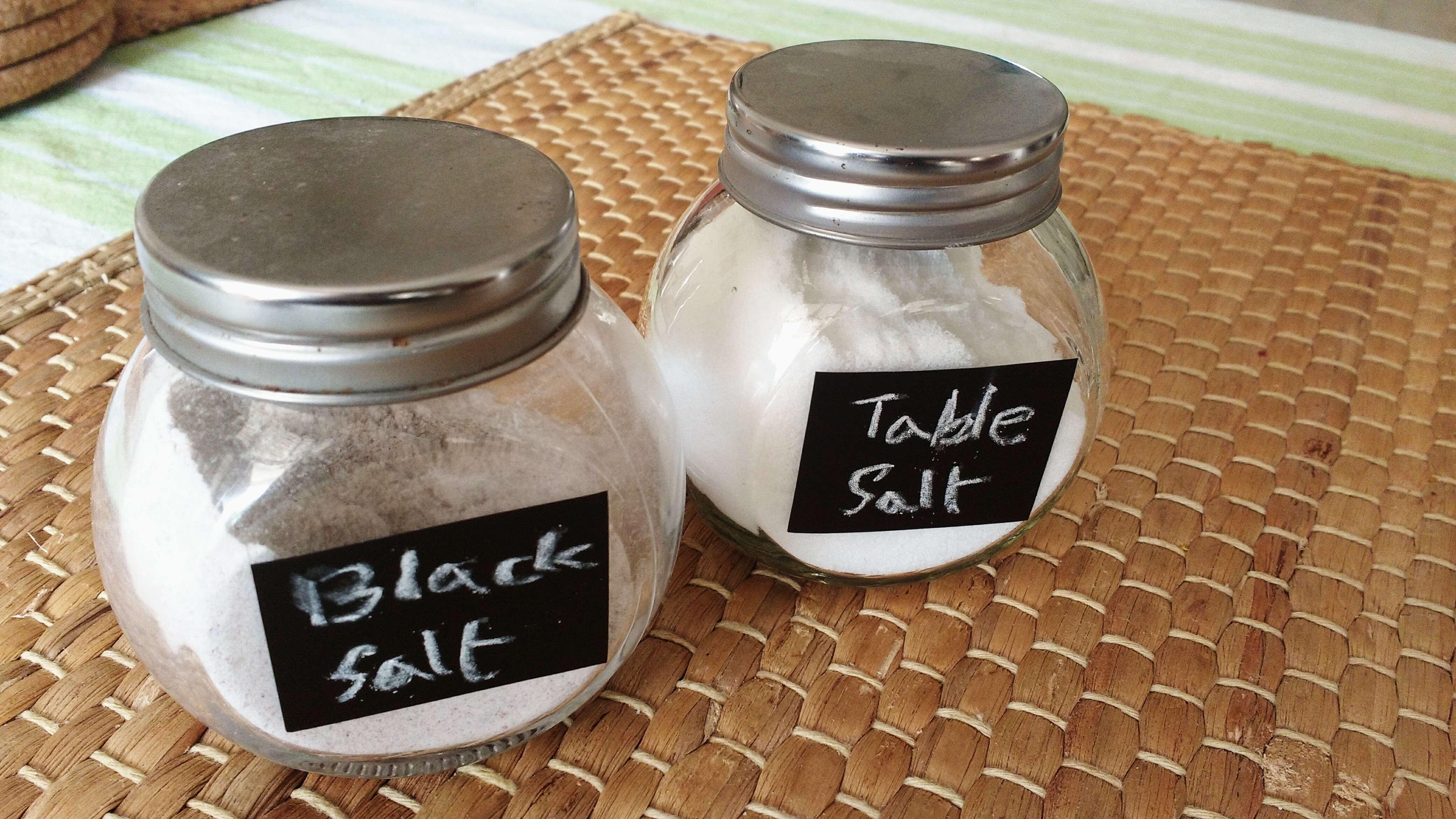 Black salt vs table salt – which one is better for your health?

Home - Evidence Based - Black salt vs table salt – which one is better for your health?
Spread the love

Common salt or table salt or white salt is the same, that is, sodium chloride (NaCl). (1) One gram of salt (sodium chloride) equals 390 milligrams of sodium. (2)Black salt is a commonly available, natural, black-colored, rock salt which has a slightly pungent smell. It consists of unique sulfurous compounds which makes it quite useful. Black salt also primarily consists of sodium chloride, but additionally, it also contains traces of many other useful minerals like sodium (Na), Potassium (K), Magnesium (Mg), calcium (Ca), Iron (Fe), Silicon (Si), strontium (Sr), Lithium (Li), Chlorine (Cl) and Sulphur (S). The benefits of black salt are mainly exhibited due to the presence of trace amounts of these minerals in black salt. But black salt vs table salt – which one is the best?

What are the differences between table salt and black salt?

Both table salt and black salt are sodium chloride (NaCl), but there are several differences between these two types of salt which are summarised in the following table-

What is the importance of salt?

Salt is the most commonly used food additive throughout the world.

Many edible salts are used throughout the world, all of which are mainly composed of two elements, namely, sodium and chlorine, both of them are essential for the body but cannot be synthesized by it. So, a moderate intake of salt is good for our health. But when salt is habitually consumed in excess amounts, it is considered toxic.(3)

What amount of salt is to be taken by a normal adult?

U.S. dietary guidelines suggest that an adult should not consume more than 1 teaspoon of salt (5.8g/day) in a day. Intake of this amount of salt supplies the required amount of sodium and chloride but does not cause any harm to our body.

But the problem is that we are habitually consuming more salt than the recommended amount. It is estimated that our salt intake is around 9g per day that is we take an extra 3.2g of salt in a single day and around 96g salt in one month, and 1Kg 168g of salt in one year. This extra amount of salt is harmful to our body which invites many lifestyle disorders like hypertension (high blood pressure), cardiac problems, and obesity. (5)

Why black salt is recommended instead of common salt in our daily diet?

In today’s world, we are habituated to consuming a lot of processed foods and fast foods which are rich sources of sodium. For avoiding lifestyle disorders like high blood pressure, we should try our level best to reduce the sodium content of our diet. Replacing the use of common salt in cooking with black salt is a major step for restricting our sodium intake.

What are the health benefits of regular use of black salt instead of table salt?

Black salt has a long back history in Ayurveda. It is mainly popular in South Asian countries like India, Bangladesh, Pakistan. It has the following health benefits – (7)

Why black salt is a better alternative for preventing certain lifestyle diseases?

It is evident from the scientific studies that excess salt consumption increases the risk of getting blood pressure, leading to cardiovascular disease, gastric cancer, osteoporosis, cataracts, kidney stones, and diabetes. (8) So, for all of us, it is judicious to reduce our salt and/or sodium intake.

The World Health Organization (WHO) strongly recommended reducing the salt intake of people to decrease the number of deaths from hypertension, cardiovascular disease, and stroke. (9, 10)

Suffering from high blood pressure (hypertension) for a long time is a major cause of cardiovascular disease, responsible for 62% of strokes and 49% of coronary heart disease. There is overwhelming evidence that dietary salt is a major cause of raised blood pressure, and a modest reduction in salt intake lowers blood pressure, and in terms reduces the risk of cardiovascular diseases(11). So, it is clear now that a reduction in daily salt and/or sodium intake is essential for all of us for getting a log and healthy life.

Black salt is a natural rock salt mined in the regions surrounding the Himalayas. It contains traces of fluoride. So, excess consumption of black salt regularly may cause certain health hazards like fluorosis.

Black salt has another disadvantage in that it contains only a negligible amount of iodine, so the sole consumption of black salt can not supply the iodine. For this reason, it is better to depend on commonly available iodized table salt in goiter prevalent areas.

Considering all the composition, medicinal benefits, advantages, and disadvantages of black salt, it is recommended that partial replacement of common salt (sodium chloride) with the branded black salt is good for attaining a long healthy life. We may cook the non-vegetarian recipes with common salt and the vegetarian items with black salt. Otherwise, we may add 1 Kg of common salt to the 1 Kg of black salt, mix well and use it for our regular cooking. Finally, we should limit our salt intake to 6 to 7 g per day per adult. The benefits of using this salt mixture include-

Commonly used table salt is pure sodium chloride (NaCl) whereas black salt is a natural salt, containing principally sodium chloride along with traces of other salts. Black salt contains sulfurous compounds that are responsible for the characteristic color, smell, and taste of black salt. Black salt contains a comparatively lesser amount of sodium which makes it suitable for hypertensive individuals. Black salt contains traces of fluorine but a negligible amount of iodine. So it is better to partially substitute common salt with black salt. Mixing 1 Kg of common salt with the 1 Kg of black salt, and using it for our regular cooking is the best option for maintaining optimum health.