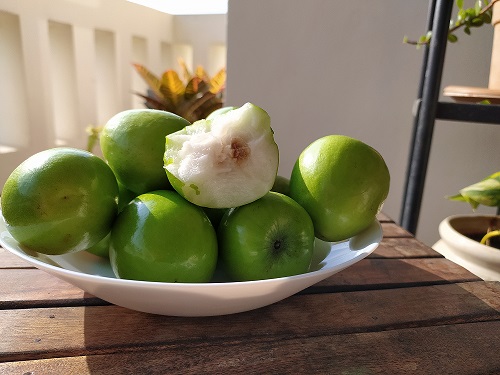 Ber is a tropical and subtropical fruit native to the northern hemisphere. There are two major domesticated jujubes, Z. mauritiana Lam. (Indian jujube or ber) and Z. jujuba Mill (Chinese or common jujube). Among two, the former is commonly cultivated throughout the northwest of India and in the arid parts of South India. The area under cultivation with jujube fruit is 8.7 lakh ha with an annual production of 8.9 lakh tones in India. Ber or Indian jujube is an underutilized fruit that has immense nutritional potentials and medicinal value.(1,2)

Indian jujube is a tropical/subtropical fruit native to the northern hemisphere. Indian jujube or ber (Zizyphusmauritiana Lamk) is extensively grown in southern Asia, Syria, northern India, southern central China, and also in southeastern Europe. Ber is indigenous to India and grows under varying conditions of climate all over India even at elevations up to 1000 meters above mean sea level. Despite being a cheap fruit, jujube remains to be an underutilized fruit in the average Indian diet in comparison to costlier yet popular fruits such as mango, apple, and orange. This is mainly because the common consumer has no information about its health-promoting effects.(3)

Ber fruit is yellowish to reddish or blackish or green drupe, with white flesh, juicy, sweet, becoming mealy in fully ripe fruit. Fresh ber fruit is generally eaten as it is. The Colour of the fruit is changed from green to yellow to chocolate brown with maturity and ripening. The blend of a sweet and sour taste makes this an appealing fruit. (4)

Ripe ber is abundantly available in Indian markets in only two months (February and March) which is the season for it. It is a moderate-cost, tasteful fruit. (5)

Names of Ber in different parts of India?

Indian jujube or ber(ZizyphusmauritianaLamk) is a highly nutritious fruit, commonly available in India. The reddish-colored, small, circular fruit is a tasteful, sweet one that is usually consumed as fresh in season (February and March). This fruit is called in different names in different parts of India. But Ber or Indian jujube or baer or bor are the most commonly used names of the fruit.

The nutritive value of the ber (Indian jujube) clearly indicated that-

But the health potentials of ber is not confined within its nutritional value because it has also several medicinal properties for which it is commonly used in traditional Chinese medicine. (9)

Several scientific studies confirmed that excess production of free radicals in our body leads to oxidative stress which in term invites many diseases like obesity, diabetes, cardiac problems, dementia, Alzheimer’s disease, and many more. So, the elimination of free radicals from the body cells is the key to remaining active even at old age. A few studies indicated that ber is an excellent source of natural antioxidants. As the fruit matures, the amount of antioxidants increases. So, in terms of antioxidants, ripe fruits are better than unripe ones. Seasonal intake of fresh ber fruits is effective to prevent many lifestyle diseases.

More or less, we enjoyed ber in season, at least once in a time. But we have several quarries regarding this fruit. I tried to summarize these questions and answer them.

Is excess consumption of Ber harmful ?

Scientific study confirms that excess intake of ber is not for the body. It will not cause any harm to your liver or kidney. But like any other fruit, too much intake of ber at a time may cause poor digestion. So, it is better for anyone, either child or adult, to take 5/6 ber (Indian jujube fruit) at a time.(13)

Is Ber good for diabetics?

Ber is a low calorie (104 Kcal /100g), low carbohydrate fruit (17g carbohydrate /100g), containing moderate amount of fibre (1.3g /100g). Galactose, fructose and glucose are the major sugars found in ber fruit. So, the carbohydrate profile of ber make it suitable for those with obesity and/ or diabetes.

Ber has an antidiabetic property that means regular consumption of ber fruits helps to reduce blood glucose levels and this is true particularly for those having high blood glucose levels. So, this is healthy fruit can be safely taken by diabetic individuals without any fear.

But since the excess intake of ber lowers blood glucose level, those persons with a tendency of low blood glucose level should not take excess amount of ber. Diabetic persons who need to take insulin on regular basis should also avoid ber intake as it may cause hypoglycemia. (14, 16 )

Ber contains a negligible amount of fat (as little as 0.07g of fat per 100g of fresh ber fruit). Triglycerides having medium-chain fatty acids are abundant in this fruit. Overall, it is a low energy, low carbohydrate fruit, suitable for obese persons, diabetic individuals and cardiac patients. (15)

Is Ber appropriate for cardiac patients?

Ber is a low-energy, low fat, fiber-rich fruit, rich in several vitamins and minerals. It is an excellent source of several antioxidants. It can be safely taken by cardiac patients or those suffering from high blood pressure (hypertension). It has the following advantages, making it suitable for these patients-

What are the vitamins present in Ber?

Ber fruit is a highly nutritious fruit, rich in several vitamins and minerals. It is a rich source of vitamin C and several B-vitamins like thiamine, riboflavin, and niacin. Ber contains an appreciable amount of carotene.

Looking for antioxidants in diet? Take more Ber in season

Ber is a less utilized seasonal fruit, commonly available in our country having an excellent antioxidant profile. This fruit contains several types of antioxidants like polyphenols, flavonoids, anthocyanins, and pro-anthocyanidins. Scientific studies indicated that dried jujube is beneficial for patients suffering from diabetes, obesity, dyslipidaemia, liver problems, and inflammation. (16, 17)

Ber is a nutritious and health fruit. It is safe to consume for children. It is good for those suffering from obesity, diabetes, high blood pressure or cardiac problems. It is good for your brain, blood and gut.

Ber or Indian jujube (Zizyphusmauritiana Lamk) is a commonly available, seasonal nutritious tasteful fruit. It is a low-calorie fruit, rich in micronutrients like vitamins and minerals but it is a poor source of macronutrients like protein, fat, and carbohydrate. It is an excellent source of several antioxidants. For children, this fruit is safe for consumption. It is good for those suffering from obesity, diabetes, high blood pressure or cardiac problems. It is good for your brain, blood and gut. This fruit is called in different names in different parts of India.